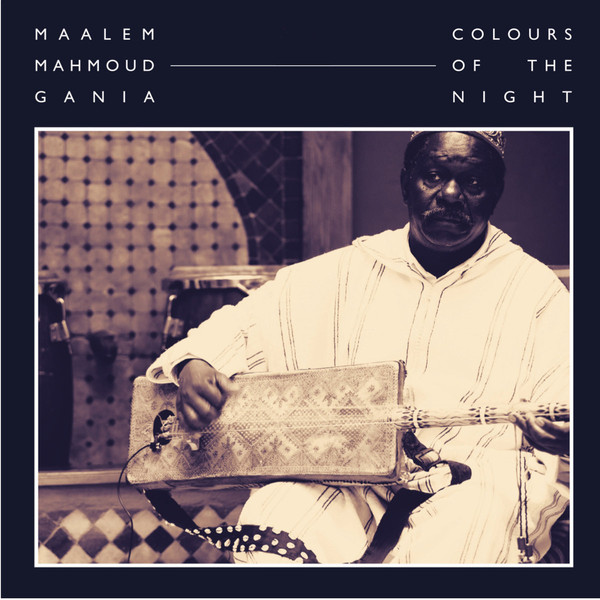 One of the more unfortunate and sometimes derided aspects of world music is its tendency to flatten the traditional musics it draws on. For every great album there are several that take a cultural tradition and process it into an aesthetic or flavor that is draped over primarily Western dance music, ambient music, or if it’s “world fusion”, jazz. Gnawa music, the famous signature music of the Gnawa people of northern Africa, has been an increasingly common subject for such treatment. In its almost trance-like, subtly shifting groove, declamatory call-and-response vocals, distinctive plucked string melodies with flattened notes, and fusion of West African and Islamic musical influences, it is often likened to an Islamic cousin of the early blues, and indeed the actual Islamic “desert blues” of musicians like Tinariwen and Bombino in the Sahara can sound remarkably similar to Gnawa at times. The government of Morocco has done much to promote Gnawa music to the world, with its Gnaoua [sic] World Music Festival attracting hundreds of thousands to the city of Essouaira annually.

But Gnawa music as an entertainment, a fraja as the Gnawa themselves would put it, is a historical anomaly. For most of its experienced, Gnawa music was reserved for closed religious rituals. Colours of the Night is a peek into the original Gnawa music, played in the traditional manner, using traditional material, to achieve, however it might be compromised by being recorded onto vinyl discs to be listened to in a profane context, at least nominally sacred ends. This is not really an album and these are certainly not songs, and the bombast and showmanship of the various fusions is stripped away. Those who read my review of Fangnawa Experience might remember my mention of the two main Gnawa instruments, the guembri lute and qraqeb castanets. Here, they’re it as far as instrumentation goes. No drums, no guitars, no keys, no electronics, just the stark austerity of a small, reedy-sounding lute, a few castanets going clicky-clack, and ritual singing/chanting from the musicians, the guembri player leading and the others responding. Only something like medieval Catholic plainchant could match this arrangement in its black-and-white simplicity. This is hardcore Gnawa music, mostly unconcerned with Western sensibilities and captured just as it is.

This is sacred music that one must give oneself up to, inward, even guarded, rather than bursting out through the speakers and trying to sweep the listener off their feet in a wave of compulsory awe like Handel’s Messiah or a modern gospel ensemble. There are no “hooks” to a Western ear and at first the guembri licks that form the backbone (really, the only bone) of the music might initially seem almost arbitrary in their meandering, sinuous course that recognizes no key or tone center, one lick flowing into another after another, with licks frequently resurfacing in different tracks. These different licks seem to have religious significance, representing the titular colors of the night (which, in a proper lila, or sacred performance, are represented by seven colors of drapery and dress), the seven mluk of Gnawa folk religion, an Afro-Islamic syncretism that seems to parallel the Afro-Christian Vodun, with a similar focus on propitiating, negotiating with, and being possessed by a group of patron spirits. Like Vodun, Gnawa religion was one of enslaved people in a foreign land, a survival capsule for African religious culture in an alien, Abrahamic environment—hence colors of the night, with the nocturnal rituals serving as a respite from the laborious day of God, where one went to the enslavers’ mosque (or later, church) and prayed the enslavers’ prayers.

Perhaps it is my love of, and one time study of, the bass that drew me to this album. Many bass players have at some point watched a higher-pitched, more nimble instruments hog all the fun parts and imagined stealing their thunder. In that regard, Gnawa is the ultimate bass player’s music in that the bass does just about everything, defining the melodies, the tempo, the rhythm, everyone else’s cues, and it is, in the ritual, the player is the master of ceremonies, and his instrument most direct channel to the mluk. One thing nearly every Gnawa fusion does is bottle the bass back up, imposing a metronomic beat, whether from a drummer or a sequencer, to impose the rule of 4/4 law and serve as the foundation for a jazz or pop arrangement. Sometimes the guembri is thrown out entirely for the dark, dull, flavorless tones of a generic Fender electric. Here the entire band hangs on the guembri player’s every note, speeding up when he speeds up, slowing down when he slows down, answering its melodies with their voices.

The guembri also has a fascinating tone color. Like many simple instruments (and, consisting of only a half cylinder of wood, a camelskin membrane, a wooden bridge, and three gut strings secured with leather straps to a stick for a fingerboard, string instruments hardly come simpler than this), it has a very unique and complex, but also relatively small and modest sound. It’s earthy, woody, but also almost voice-like in the way the musician bends and manipulates the pitch of notes on the unfretted fingerboard, and lacks the sharp, sudden twang of a modern guitar, bass, or banjo. Though it neither looks nor, in the hands of lesser musicians, sounds like an agile instrument, Mahmoud Guinéa (also spelled Gania, Guinia, and several other ways, with no Romanization seeming to be definitive) makes it fly, and his fingerwork would give the likes of Jaco Pastorius and Tony Franklin a run for their money in its dexterity and accuracy, and probably beat them both for expressiveness. It’s doubly impressive when you consider that Guinéa recorded this at the age of 62, only two years before his death in 2015, while the aforementioned Western bassists both peaked in their twenties.

The flexibility of the guembri and the maâlem’s control over the pace of the music, combined with the soft attack of both the guembri and the qraqebs, gives Gnawa music a very loose approach to time, like classical rubato but even more extreme. As long as everyone is going in the same direction and keeping up the pace without faltering, it just doesn’t matter if their notes don’t all line up down to the millisecond. The qraqebs even seem intended to be out of phase with each other, multiple qraqebs’ hits flamming and smearing into something almost like a rhythmic shaking or rattling sound, like horse hooves full of pennies. The soothing and slightly irregular shikka-shikka-shikka forms a sort of rhythmic river that the guembri and the vocals glide over like liquid, instead of stutter-stepping through the beats like a rock band. Sometimes it feels broad and lugubrious, other times rushing and surging, but it’s always there. I have to admire, if not envy, the people who have to click those castanets together, almost continuously, for hours in a complete lila.

It is hard to speak of a favorite song on this album because it is really hard to speak of songs at all; the ninth level guembri sorcery and relaxing horsey castanets start and stop, but seem to do this with little regard for Western-style song structures. There is no telling for non-Gnawa how these selections relate to the progress of the Gnawa religious rite, and information on the appropriately minimalist packaging is largely limited to a list of participating musicians, basic recording information, and nothing else. There are no lyrics provided, and perhaps all the better to keep outsiders at a distance from the sacred liturgy. That said, “Sidi Sma Ya Boulandi” stands out for its subtle use of synth pads to thicken the pensive, brooding atmosphere Gnawa music provokes without drawing attention to themselves.

Though it does not reach the Wagnerian scale of a full, authentic ceremony, this is a long album of long tracks, with the shortest being nearly eight minutes and the longest over ten. When combined with its nearly complete lack of Westernization, this can make Colours of the Night quite the challenging release to get into, with all these long, very similar pieces bleeding together into a continuous 70-minute experience where no one track really feels independent of the others. It works its magic best in a quiet place where its subtlety and atmosphere can be fully appreciated, away from the noise and bustle of cars and gyms. It is an album of fine details, subdued gestures, and delicate, haunting beauty, sharing common elements with Western Afro-diasporic music, but through an entirely different cultural frame.

But Colours of the Night is also a commodity—after all, we live in a society of commodities where it is nearly impossible to find anything that is not bought and sold, and even the most authentic representation of traditional Gnawa music can never be the real thing outside of the original ritual context. As much as it rejects the sounds and structures of pop music, it is still a fraja, not a lila; profane, not sacred; a map, not the territory. With acceptance of African music by other cultures comes commodification and ultimately exploitation of African music by other cultures—the two, in a commercial economy, cannot be separated. A form of music created for black people to escape an alien culture can easily become a venue for absorption by another alien culture, and the celebration of a certain vision of “Africa”, as articulated by commercial venues such as the Essouaira Gnawa festivals, have the potential to obliterate local conceptions of the land, its people, and its history.

If you are expecting me to give a Tumblr-style What Is To Be Done explaining what to do about cultural appropriation, I have none to give. This is a quandary, not a problem, a question of costs and benefits, not of pure good or bad, and of social structures far greater and further-reaching than the individual consumer looking to buy something or not. But like with Heisenberg and Schrödinger trying to peer at subatomic particles, to observe a cultural phenomenon is to affect it. I am stricken by the beauty of Colours of the Night, I adore it as a piece of music, a work of art, and a document of living history, half a millennium condensed into 70 minutes of music. But what will happen to those nocturnal colors after a few more years of Occidental Gnawamania? What will the success of Gnawa music in the international market mean for the Gnawa, for whom it is far more than just music?

The only thing for certain is there is no stopping the integration of the Gnawa and their culture into the wider world. It is only natural that, with the explosion of international musical contact brought on by the internet and by streaming services (Colours of the Night is also available on Spotify), the various threads of local music across the world would intertwine both with each other and with internationally popular Western styles. And if nothing else, Colours of the Night will stand as a document of, if not quite its pre-contact form, something very close to it. For that alone, it is valuable.